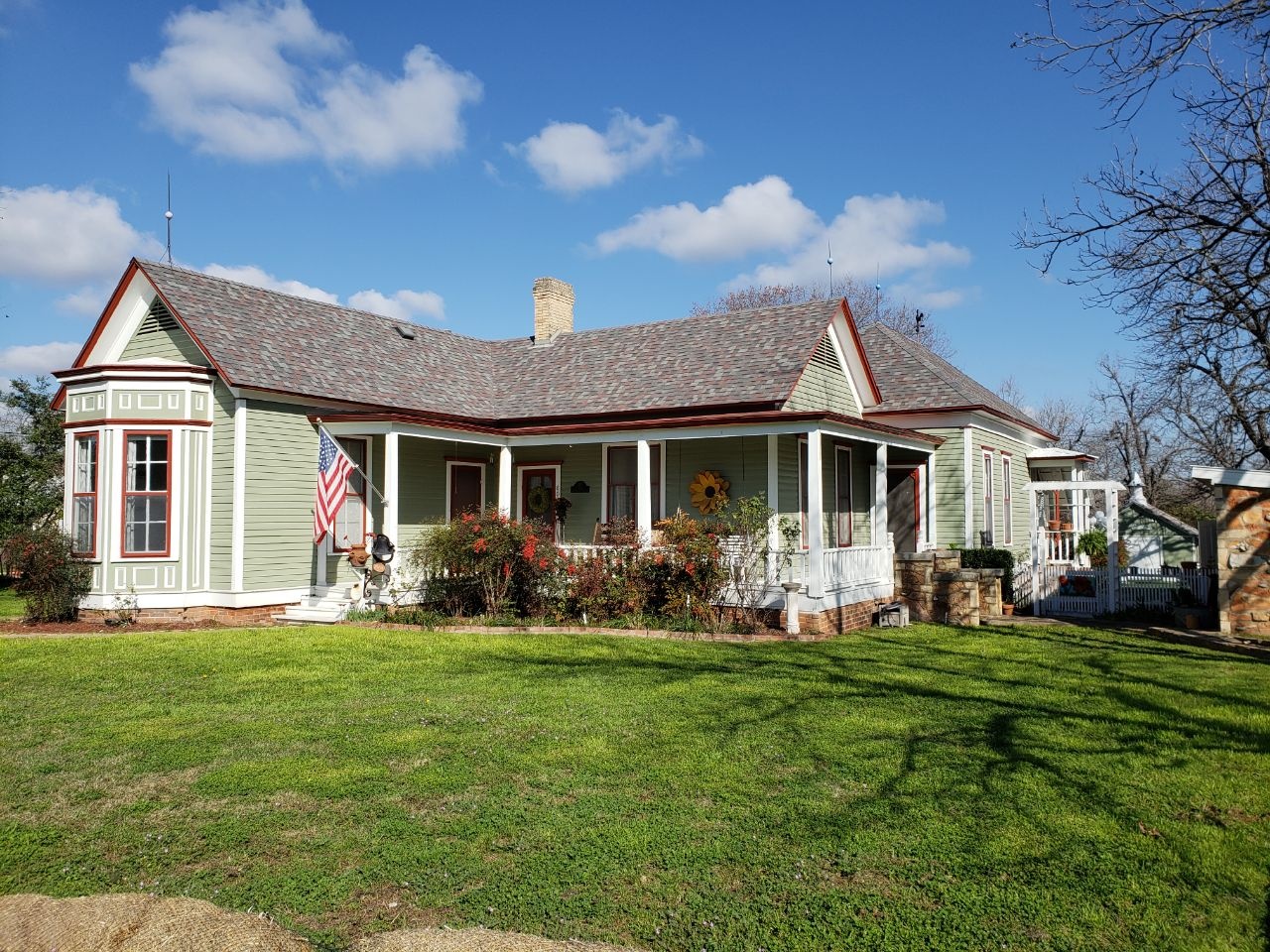 The cold wood floors at 603 E. 7th Street creaked and groaned in the dark as Carla Schaefer walked across the old boards.

Just two or three weeks earlier, she'd closed on what was locally known as the Carothers-Thomas house and stepped into a legacy of love wrapped up in a century old home and a carriage house turned flower shop.

"I got to the middle room with the fireplace and I stopped," Schaefer said. "I could feel the love in this house. It was so full and I knew it was the place I needed to be."

A History Full of Love

It's not hard to understand what Schaefer meant when she described the tangible feeling of love found at the old house. Visitors are enveloped in southern hospitality from the moment they step onto the porch.

Schaefer is only one of a few people who can say they've owned the home and each owner seems to have woven decades of love and joy into the time worn beams and stained glass windows, Schaefer included.

"I love the happiness in the house," Schaefer said. "I can feel it. It's alive. When people come to this house, they tell me, 'you can feel the love,' and I think...I didn't start that. It's just a legacy that I'm trying to continue.”

The Carothers-Thomas home bears a plaque on the front dating it's first appearance in 1904, though Schaefer is convinced it may have be built earlier, perhaps 1890.

"The original address of the house was probably on College Street," Schaefer said. "In 1904 or around there, they switched the address to 7th Street."

The Carothers family first called the residence home and if you look in the structure beside the home, you can see the initials of some of the family members painted on the original walls. Frank Carothers served as mayor of Georgetown, TX from 1884 to 1896, according to the 2017 edition of The Original Guide to Georgetown, and is buried in the Odd Fellows Cemetery in town today, according to Find a Grave.

Eventually, the Thomas family purchased the home and it's much of their legacy the community remembers today. Alice Thomas Turner, now 95 years young, was only five-years-old when her mother, father and eight siblings moved in. She lived there until she married and said she has many fond memories of the home.

“In the winter we would gather around the fireplace and my father would read would read a chapter out of the Bible and he would say a prayer and then we’d sing a song, a hymn,” Thomas said. “Those are really beautiful memories that I have, and I think my older brothers and sisters would agree if they were around."

Thomas also recalled roller skating and riding bikes around what was then the back porch and retreating with her siblings to the shade during many Texas summers.

Ahead of Her Time

In 1945, tragedy struck the Thomas home when JD Thomas passed away at the age of 50, according to the Texas Department of Health. Although several of the children had grown up and moved out by then (Alice Thomas included), Thomas's mother Laura was still left to support the five children still at home.

“She didn’t…have a clue how she was going to support them,” Thomas said. “She had only a high school education and she started an Avon businesses on the dining room table and then the hot house was already there and she started making corsages."

In addition to selling Avon and making corsages, Laura Thomas rented rooms and sold some of the surrounding property. But, when she noticed the constant, solemn procession of funeral mourners passing by her home, she had another idea.

“She noticed that people were driving from the funeral home at one [end] of the Seventh [Street] to the cemetery at the other end of the Seventh [Street] and she loved to garden,” Schaefer said. “So, she had her sons pull down the old carriage house, dig it out, put potting beds, and they pulled rock right out of the San Gabriel and built out this green house, and she started the town’s first florist and it was the town’s first florist until she died."

With her floral business in full swing, Mrs. Thomas had become an image of an early working mom and she'd be bouncing from one activity to the next and installed a system to help her do just that. On each of the main doors in the home sits a vintage turn knob door bell. Thomas's mother made sure each bell carried a different tone, so she could know by sound alone who was at the door and what they needed.

‘I’m a working mom and…multitasking all the time,” Schaefer said. “Mrs. Thomas was also a working mom and she had dishes to do and kids to feed and you know, everything else…she had a different door bell on every single door. So, if someone wanted flowers…they’d ring the doorbell [and] she would know that they needed flowers. If they rang a different door, it was someone to come for a formal visit. If they ring the back door bell, it was more of a casual acquaintance."

Today, the bells are one of Schaefer’s favorite features and she said her dog has learned the different tones and runs to the corresponding door whenever the bell rings.

Adding to the Legacy

Stories like these are all over the Carothers-Thomas home and Schaefer wouldn't have it any other way. When she bought the house, she said she promised the previous homeowners she would do all she could to preserve the legacy of the home.

The fulfillment of Schaefer's promise was put to the test when in 2019, Alice Thomas visited the home during the Preservation Georgetown Historic Homes Tour. Schaefer said she was worried how Alice would feel about some of the adjustments she'd made to the home, even though she'd kept more of the original home than she'd changed.

Much to her relief, Thomas was delighted.

“I was just so thrilled, I didn’t know what to do,” Thomas said. “She had taken my home and made it so beautiful. It was just so exciting…It was wonderful. She has done so much to it. I’m so pleased, so thrilled over it."

Thomas's response is perhaps the best example of why Schaefer seems to fit in the home so well. While it's true Schaefer has certainly left her touch on the home, she's only done so while maintaining the integrity and personality left behind by her predecessors.

"Every house has a personality and every house is different and every home has something about it that makes it unique," Schaefer said. "I think we have an obligation to carry that on as part of Texas history, as part of Georgetown history, because it was here before we were."